Surprisingly, I've seen that many people have problems with visualizing and writing code for this. Especially for rotatable camera. Indeed, it might seem that spinning camera along two directions would be hard (since a single pair of lengthdir_x/lengthdir_y/cos/sin will not cover it), but implementation is actually pretty simple: 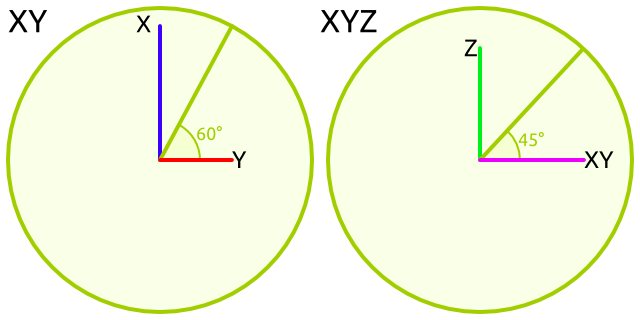 On above image, you can see representation of vectors for angle pair of Z angle (pan) and Y angle (tilt).
Left image displays, what originally goes in XY plane. I suppose that you know this one (if you've got to trying to do something in 3d). 1 point long vector coordinates can be found out via cos/sin operations.
On right image you can see how it goes if you add a second angle (and third axis), viewing from side (at -pan degrees). Previously seen XY vector is now flat and marked by magenta line. New angle (tilt) rotates it upwards, making the formula: Or, if you were to use lengthdir_ functions, Once you have a vector, adjusting camera position and rotation goes simple: (here, distance is a variable indicating distance from camera to target object)

As of time of writing this post, GameMaker does not support shaders. Moreover in version 8.0, which I provide examples for (for sake of compatibility). However, if your game does not have that much polygons, there's an old trick for cel shading:Since the culling is on, and "outer" model faces point inwards, only ones behind the model are visible, creating a "border" around the model. Obviously this is not a good strategy for larger models (since amount of drawing operations is doubled), but with low-poly models it's not noticeable.

This is another thing that you shouldn't be doing if you have high-poly models and that is done here due to absence of such (and ease of this method). If you've noticed, when you look at a model from above in 2D view, you essentially see the shape that would have been shadowed. So why not use that?
A trick used for collectable objects here is that the shape is drawn a second time with transformation that flattens it completely (Z scale = 0) and puts it just on ground, making it look like shadow. For more complex models it is generally recommended that you bake shadows into surface(s) to avoid excessive drawing.

Despite of looks, adding 3d movement is just as simple as adding 2d one. With a difference of using your own variable (normally z) which is modified and used for drawing. Here 3d jumping and character-floor collisions fit in just 6 lines: I'll try to separately cover 3d collisions in one of next posts.

Despite of usefulness for managing drawing, these couple of functions (at least d3d_transform_stack_push and d3d_transform_stack_pop) are often overlooked in favour of d3d_transform_set_identity. The use here is, that you can save (push into stack) the current d3d transformation with _push, and later restore it with _pop. In this example this is being used to draw different parts of primitives with different matrices, while avoiding repeating code. It can be also utilized to save a number of function calls if drawing multi-segment objects recursively. Overall, this example should be considerably useful.