A collection of answers on identity subjects.

While I had semi-stable internet access from early 2008 or so, my current nickname hadn't been in use before mid-2009.

During that period, my strategy on picking nicknames was to use my first name and then slam random letters/digits after it until finding an available combination.

In doing so I found that:

So I thought to change up the name with criteria being around:

After some considerations I settled on "YellowAfterlife", which seemed memorizable enough and didn't seem to be in use by anyone ever, all with a minor (later discovered) humorous caveat being that, if a game/app/service clamps display name length at 8 characters, I am suddenly known as YellowAf (and you might already know what AF usually stands for).

Also, you might be wondering where are those abstract games that I was going to make.

You see, I got really distracted with writing netcode and tools and such.
And then I graduated from university, so I had to prioritize making things that made it more likely for me to make a living. So, as of 2019, the list of my "abstract" games is around:

There'll be a few more notes about naming after a small interruption,

Common assumptions for what my avatar depicts include dinosaurs and birds.

The avatar originates from a random doodle I did during some university lecture in 2014: 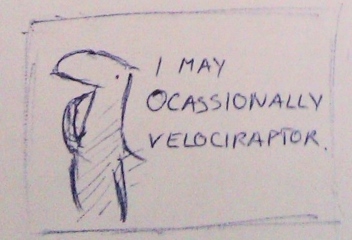 "occasionally" is a pretty weird word, if you consider

If you were to ask me what this is supposed to mean, I would have no answer, but I do recall the teacher walking by me, looking at my notes (which had a column reserved for doodles), and asking if anything I draw makes any sense, to which I replied with a soft "no".

I had quickly established that the general shape of the dinosaur looked pleasant (1), but proportions made approximately no sense - it could very well have been a horse or a dragon.
With any kind of accuracy out the window anyway, I decided to try drawing some kind of hand with a friendly gesture.
After briefly trying to sketch out a wing (2), it became apparent that I had no idea how to draw one without additional detail, let alone convince a gesture with claws on the end of it.
Then I tried to do a Rayman-styled floating hand (3), only to realize that I have no idea as to how this is supposed to work with pointy fingers.
Then I came with the current pointy hand idea (4), which doesn't seem to make any sense in terms of proportions, but looks good, so I settled with that.

Over time this pointy thumbs-up had grown to be a common emoticon for Slack/Discord chats that I visit, and later a de-facto logo of mine.

I time to time consider whether to switch up avatars, but this one is pretty recognizable by now.

My name abbreviates to YAL (or, if you are feeling pedantic, YA), but, did you know that there's also a person that goes by Yal? In fact, we have a visible overlap in our activities:

People time to time ask me if we are aware of each other.

Yal certainly predates me in use of name, and it's fair to say that we've been vaguely aware of each other for a while (as we both frequented the official GameMaker forums).

But, things only really got confusing when both of us were appointed as forum moderators at once - people had already taken up calling me "YAL" or just "yal" by then, and suddenly a realization that there are two "yal"s.

Rest assured, for a little while people would tell me that they've seen my engines (while they in fact meant Yal's) and thank Yal for my tutorials. Nowadays things are calmer in this regard.