I made a game with non-Euclidean mechanics for "Stop Waiting For Godot" game jam last weekend!

You can check it out on itch.io (this includes a web version) and find the source code on GitHub.

This is a post about how I did it and my first-time experiences with Godot.

Over years I have worked with a variety of game engines, level editors, and other tools, but my prior experience with Godot was primarily limited to the over-engineered April Fools joke I did this year.

The jam's (optional) theme was "keep it simple", but, as you might know, I don't make things because they're easy.

The Cool Moon's influence is irresistable

It's been quite a while since I made any first-person exploration games and I do quite like portals, perspective tricks, and various other puzzles, so I figured that it'd be cool to make a little game utilizing these.

Godot's equivalent of "render texture" is ViewportTexture - so you make a viewport with its own camera, it renders to the texture, and then you do what you must with it.

The reasonable approach to portals is that you render what's behind the portal to a texture (potentially a few times if there's a "loop") and show this texture in place of portal's pixels on screen.

While doing so, I at some point tick the "Own world" checkbox on the viewport without thinking - a mistake that cost me a hour of my life:
If there's no world set in the associated "World" property, this causes the viewport to use a blank world - and that blank world doesn't use your default environment settings, so it's pitch black.
Combined with inability to preview what's going on in a viewport without moving the contents to a new scene, it took some trial and error to figure out why nothing is rendering.

With that out of the way, I finally get something to render to the 3d plane in the world space, but the picture looks dark and washed out. With some experimentation (and reading descriptions of every Viewport property this time around), I figure out that:

With that done, I finally have a consistently-looking render texture! 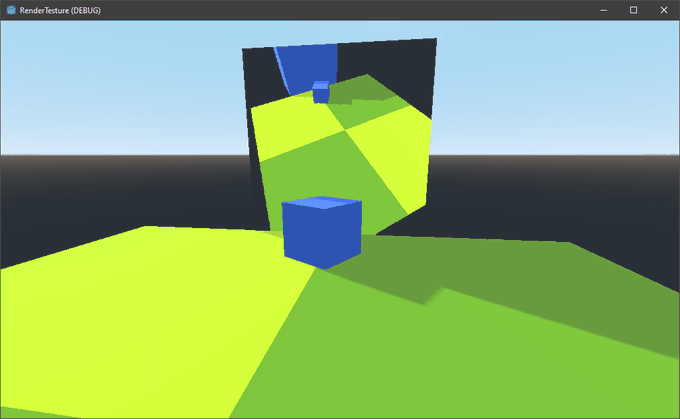 Now, it is time to map the texture to screen space, which implies a shader. I pick the conveniently-shaped "Convert to ShaderMaterial" option in my material's dropdown, it converts, and... it doesn't render in-game anymore!

After some poking around I establish that I found a bug - an important material checkbox gets unticked upon conversion.

With checkbox ticked back on, I replace the UV coordinates in the shader by SCREEN_UV, match the portal's camera to player controller's camera, and just you look at that - a real portal!

Well, except having the exact same POV as player renders the portal invisible, so I add a couple boxes to portal's viewport to make it apparent that it's there at all.

Finally, it is time for actual portal mechanics! I make the "portal" object linkable to another such object, write the most basic code to adjust the player's position as camera gets past the portal plane, and find a number of issues:

Considering all of the above, most of the Cool Level Ideas that I had in mind are out of the window.

I decide to salvage what I can by introducing a second visual gimmick: ...orb!

The orb is a polyhedron (kindly produced by default settings in Blender) that curiously spins on multiple axes and uses the same portal camera behaviour to project a world through itself, BUT:

I couldn't help but to notice that objects have render layers, and each camera can choose which layers to draw, so I can have objects that are only visible through an orb, or objects that are revealed to be fake by an orb.

My original vision for the orbs involved utilizing per-camera environment settings to have them project a night-time version of the level with hidden objects spotting a starry pattern look, but this plan had bit the dust after I noticed that DirectionalLights don't care about their render layers and shine no matter what, so I had to settle for a simpler-looking purple tint and hidden objects appearing in a moderate pink color.

With all this done, I have enough tools for no less than a few rooms worth of puzzles and less than a day left to make them.

Although it was extremely tempting to use Haxe in Godot, I decided to use the included scripting language for once.

GDScript turned out to be pretty good - it's rather Python-like, but has a large number of convenience features and optional typing - I follow similar philosophy with GMEdit (see wiki).

You can write most things that you expect from a modern scripting language without looking them up and have them work, although sometimes not the way you thought - e.g. p = {a: a} will use value a as a key - you'll need p = {a=a} for key to be string a.

Naming convention is quaint - types are PascalCase but fields are snake_case.

There is get_node and find_node, both of which accept a string parameter and return a node, but do very different things.

class_name is good for auto-completion, but is currently a little limited since cyclic references between scripts are forbidden.

Auto-completion occasionally gets lost when asked for something specific: 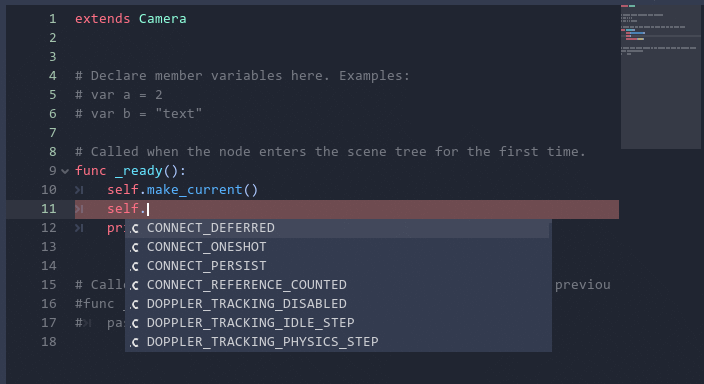 I also tried the official VSCode extension, but it also had issues with auto-completion,

and had a few other issues such as:

so I eventually went back to using the "built-in" code editor.

Having used the editor to hastily block out levels, I have some thoughts:

After not having such a good time with level design flow, I decide to check out if Godot has CSG tools or anything - and to my surprise, yes, it does, but the documentation page opens with a rather direct "how about you use something else" message.

I download the suggested Quake map editor, but it's been a hot minute (possibly an entire decade) since I've last used the kind of tool and it wasn't even this one so I decide to play around with it when I'm not on deadline.

Godot CSG turns out to be mostly okay, but sometimes freaks out and doesn't triangulate faces when using semi-complex combinations of add-subtract operations. I wiggle the hole-shapes around the wall until they stop producing seams in the mesh and call it good enough.

Where do I even begin here

Nothing to be particularly proud of, to be honest - player physics are pretty much just the code from First Person Exploration template, except I tweaked the physics to be a little "snappier" and added "coyote time" (you can press jump a split-second late after falling off a block).

Portal physics are a little more complex, but ultimately come down to coordinate adjustments.

The single issue I encountered is that standing on two overlapping colliders causes the player to "vibrate" due to move_and_slide pushing them out... for some reason.

Sometime halfway through game development I figured that it's finally time to run my game on HTML5 and see if it works at all or not.

Despite (the manual mysteriously saying "If a runnable web export template is available" (without linking to a page that notes that you need to download export templates first), everything went better than expected.

The good news are that Godot uses WebAssembly, meaning that games work pretty close to native on HTML5, save for having to lock mouse in response to a click and some vendor-specific oddities with complex shaders.

The bad news are also that Godot uses WebAssembly, meaning that your little game comes with a big 17MB wasm blob (4.4MB zipped).

With jam deadline extended, I decide to actually have someone play-test my game.

After giving a build to the first person with an integrated GPU, I discover that:

The first one is an easy fix - I can add a key to toggle shadows.

The second is trickier - I try VisibilityNotifier, but this doesn't help much as this includes portals occluded by walls; adding a distance check only helps so much as many portals are only visible from a specific narrow corridor.

I settle on a different approach - since I know very well where you are supposed to look at portals from, I can set up 1-2 regions around the portal that the player needs to be in for the portal to be visible when it's expected to cross the player's view.

This also allows me to switch orbs to a non-portal material as soon as there's no reason to care about them.

With all that done, the game seems to run well enough.

Since a game jam implies a deadline, I decide to ask questions on the official Discord server.

Initially this has mixed results - most of my questions are less common than I think them to be, and the server does not employ a "busy help channel" system like GameMaker server does, so plenty of time someone else asks a question after me and my message drifts out of view, never to be seen again: 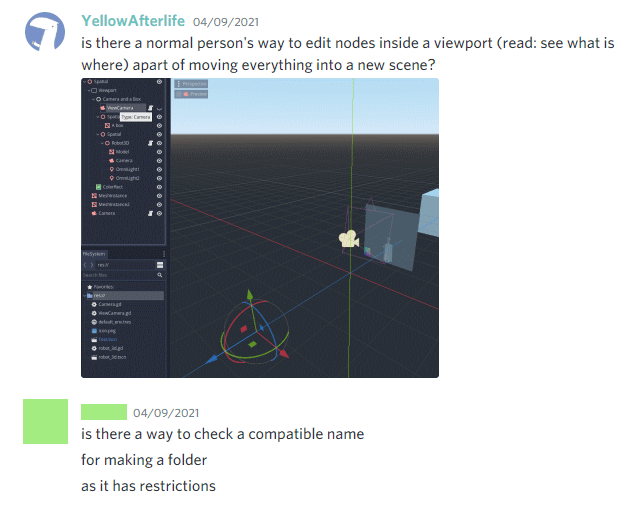 I eventually start asking questions in the channel dedicated to the game jam, and this works out better, as there's at least one other person (eons) that worked with Viewports before.

The answer to some of my questions turns out to be "you cannot, but this is planned for Godot 4".

Godot 4 is an upcoming, almost-mystical major version that is set to address many of the existing issues with the engine - a holy grail of sorts. Naturally, with so much to do, no one knows precisely when Godot 4 will be ready.

In past few days I have decided to experiment with Godot a little more, determined to squeeze some adequate-looking lighting out of it after all.

I look into TrenchBroom a little more.

It is good, but lacks support for concave geometry, which is essential if you don't want your composite shapes (say, a wall with a doorway cut through it) to do this:

I was originally sceptical of being able to achieve seamless baked lighting across portals, but what do you know - perhaps I can't have seamless lighting at all! If lighting is glitchy everywhere, would this make the player less suspicious of portals?

My attempt to make an editor plugin to automate the process of re-importing and re-generating the lightmap as I fiddle around with materials and settings resulted in immediately breaking Godot in two different ways.

Time will show whether I'll further revisit this - I suspect that the answer to many of my exotic problems lies in tweaking the engine to behave as necessary, but the games I want to make aren't nearly big enough to justify doing so.

3 thoughts on “Making a non-Euclidean game in Godot”