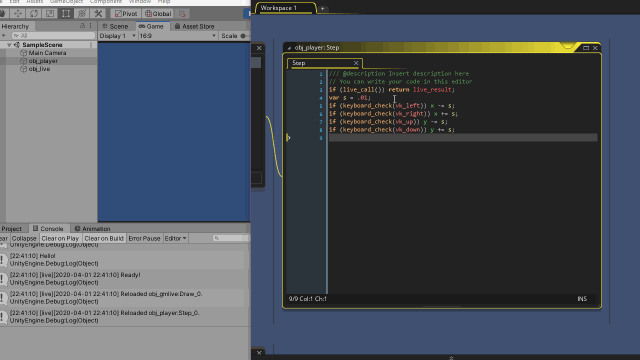 Most readers were quick to suspect something, but what if I told you that it was more real than you might have thought?

The joke (for unfamiliar)

"GMLive" stands for "GameMaker Live" and is a live-coding extension for GameMaker.

That is, it lets you edit some code, press Ctrl+S, and see the logic update inside the game, without having to recompile/restart it. Can save you countless hours when iterating on code.

With one-minute setup, cross-platform support, and additional features (like sprite/room/shader reloading), it is widely regarded as one of the more useful extensions you can get for GameMaker, let alone in that price bracket.

You get the idea.

Rest assured, there is no practical use case for this.

I also take the opportunity to gently poke fun at Unity's live recompilation - although very powerful, there's a number of caveats (sample), and it can be hard to make use of in an environment where a lot of code comes from assets (and may not be compliant in any way).

On the morning of April 1st someone messages me and asks if I'm going to do anything for April Fools on Russian GameMaker community that I moderate. They suggest to post that the language update is out, but I disagree, as that's evil - everyone are already waiting for that.

I consider what other options there are and recall that I wanted to do "GMLive for <not GameMaker>" for Apr01 at some point. As I already have Unity installed, I decide to go with that. I consider my options:

I guess it's fairly apparent what I went with

We did not go to the Cool Moon because it was easy. Or for any identifiable reason.

Haxe is a language with the primary feature of compiling to other languages.

The process of getting my code to compile for C# was fairly straightforward:

Upon getting the code to run, it came to my attention that some things do not work,

so I fixed those:

In process I also discover that Haxe's generated C# can be hard to look at:

Mostly you don't have to (since Haxe will generate preprocessor definitions to map back to Haxe code), but if something goes wrong with generation, it's an interesting time.

A little more tooting? No? Okay.

but it certainly takes some work. More so for a fully typed language.

Anyway, with all that out of the way, the code was working as intended, so I implemented the few functions needed for this and recorded the GIF.

And a little cheating

Then, of course, we have a caveat: the GameMaker API.

Unity does not have a conveniently named package of GameMaker-like functions, so I'd have to make those myself.

So I do... for what is needed for the GIF. Which is 5 constants, 3 functions, 3 global variables, and two instance variables total: 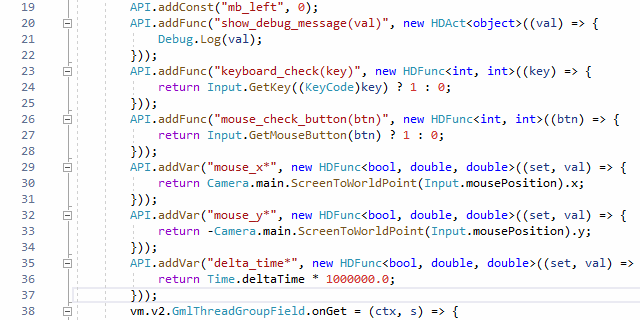 If we were to go by auto-completion file for GameMaker Studio 2.2.5, that's 1877 functions less than is needed for 100% API coverage.

But can you make it practical?

With some work and cleanup, it can serve as a good base for a game-specific scripting language - just like how Nuclear Throne (API reference), Forager, and Rivals of Aether use variously customized bits of GMLive's (GML) VM code.

I have talked about specifics and advantages of having a fine-tuned custom language in past.

Perhaps a matter of time / someone having a budget and desiring a non-Lua scripting language.

Overall, this was a fun thing to do in a day. 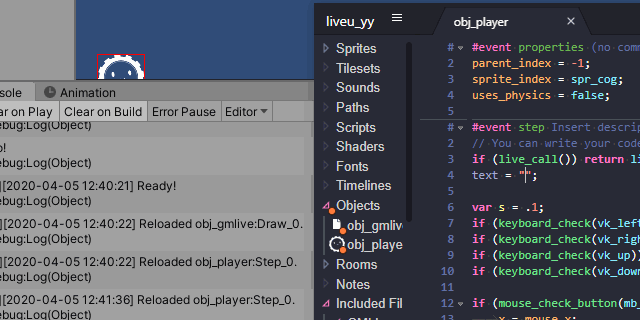 One thought on ““GMLive for Unity3D” breakdown”