Over time, I have witnessed a particular scenario a few too many times:

Having spent far too much time arguing with people and explaining how to use version control, I have decided to make a blog post that would cover a few things on the matter:

While this tutorial is oriented on GameMaker: Studio users, it can also be easily applied for other tools.

To name a few,

While the use of version control would originally require certain familiarity and ability to read manuals, nowadays the situation is improved vastly - multiple visual (GUI) clients exist for working with version control software, multiple services exist for hosting projects privately or publicly (as previously mentioned), and overall there are very few excuses to not make use of this.

So, let's start - you only need the ability to read and a bit of time. No monetary investments required.

Setting up a repository

First, you'll need to set up a repository somewhere.
The common options are GitHub and BitBucket.
Out of the two, BitBucket has better starting plans, so we're going to use that here.

So, navigate to BitBucket, create an account (or login to an existing one), and pick "Repositories - Create Repository" in the menu (or go here). The meaning of options are as following:

That said, you can just fill out the "repository name" field and click "Create repository". And there - you now have a repository.

Setting up a version control client

The next step is to get software that would permit you to conveniently work with repository(ies).
BitBucket actively promotes SourceTree, which is a piece of software by the same company: 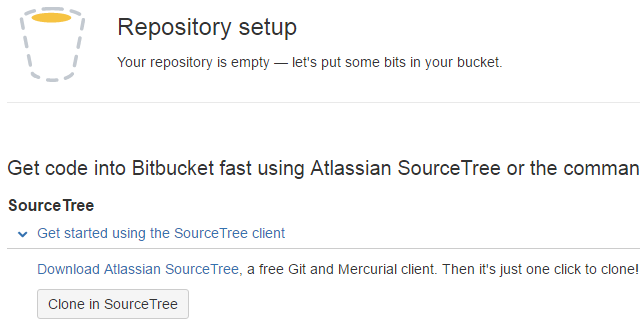 SourceTree is fine. While it does not attempt to do fancy syntax highlighting like GitHub Desktop or GitKraken, it's lighter on resource usage (won't choke when viewing an initial commit with a thousand of files) and supports both Git and Mercurial.

After you have installed the desired variant of software, you'll need to "clone" (download) a repository.
If you've picked SourceTree, that is achievable by clicking the "Clone in SourceTree" button.
Otherwise you'll need to take the repository URL (https://Name@bitbucket.org/Name/RepName.git, shown in the "Command-line" section on BitBucket) and open a "Clone repository" dialog.

This will bring up a dialog like this (with slight differences depending on the software used): 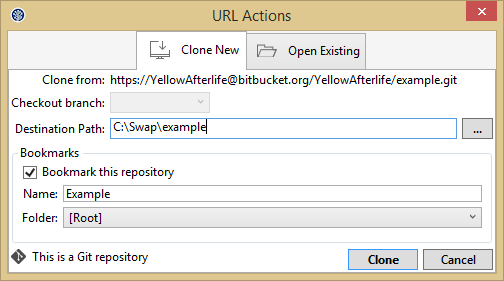 The only important option here is "Destination Path" - that is the location, to which the files are going to be downloaded, and which will be checked for changes by version control software.

Most commonly you would want this to be the directory where the project already is, but, for various reasons, most version\revision control clients will not let you clone a repository to a directory that contains any files.

So, if you want to keep the repository in a ProjectName.gmx directory (as opposed to having it in ProjectName directory), you'll need to temporarily rename the original directory.

After clicking Clone and waiting for a few seconds you will have the repository folder set up and containing either nothing at all (aside of a hidden .git directory, which houses the changes and other data) or a few pregenerated files (.gitignore, readme.md). The repository will also show up in the client program.

Now that you have your repository on the server, disk, and in the version control software, it's about time to actually push the project files into it.

First, you move the project files into the repository folder (via file explorer).

A repository tab opens afterwards, where you can see a couple of things, but, most importantly, the "File Status" tab (can be named differently in other programs). Here you can see a list of files that have been changed but not yet committed. In this case, all the files, basically: 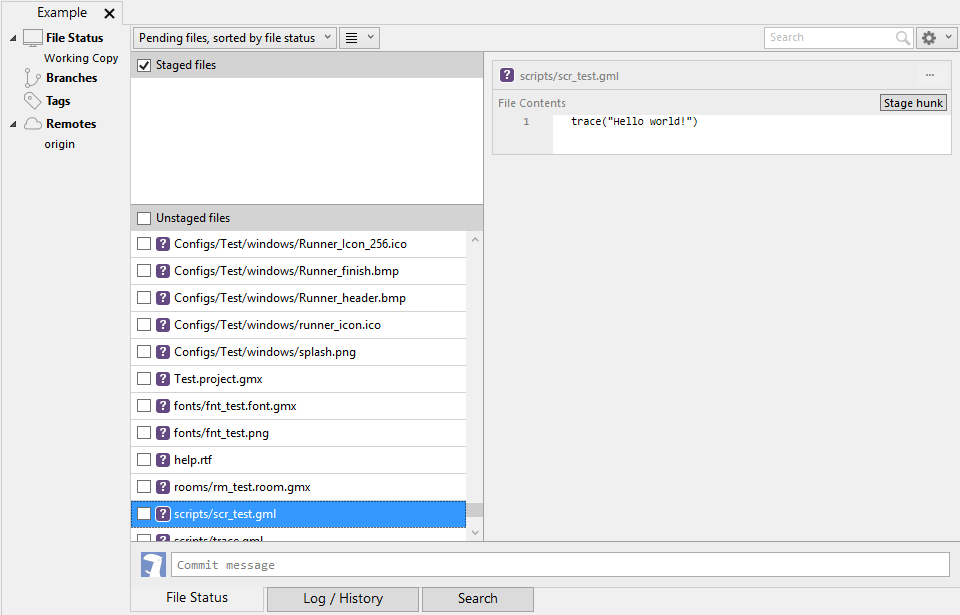 This is also the point where you can pick the files and directories that will not be stored in the repository.

To exclude a location, right-click a file in the list, and pick "Ignore..." (which brings up a little menu where you can pick whether to ignore changes to a file or directory).

Also note that "ignoring" a file is not the same as deleting it - the file will remain on disk (and be accessible), and simply not included in the repository. So, if\when you would download the repository contents (e.g. from a different device), you will need to copy the ignored file(s) manually, if they are needed.

For GameMaker, it usually only makes sense to exclude two locations:

As can be noted, "ignoring" locations via GUI adds lines to .gitignore file, which can also be edited manually for convenience or "un-ignoring" the files (which is not easily doable via GUI because you had explicitly asked to not show you these files).

Once you are done with picking the files that should not be uploaded/downloaded, you can click the checkbox near the "Unstaged files" label to include them in a "commit".

Then you enter a commit message, flag the "Push changes immediately to ..." checkbox (unless you want the files to be uploaded later), and hit the "Commit" button underneath that field (or by pressing Ctrl+Enter). That will start the upload process and you will be able to see the project files on the web version of the chosen service as soon as it finishes.

Now that your project is in sync, you can continue working with it as usual in the repository folder.

And, time to time (commonly after a bunch of changes were done), open the version control software to commit the new changes.

As previously mentioned, the GUI will show you which files you have changed since the last commit, and allow you to view the portions of files that have been changed: 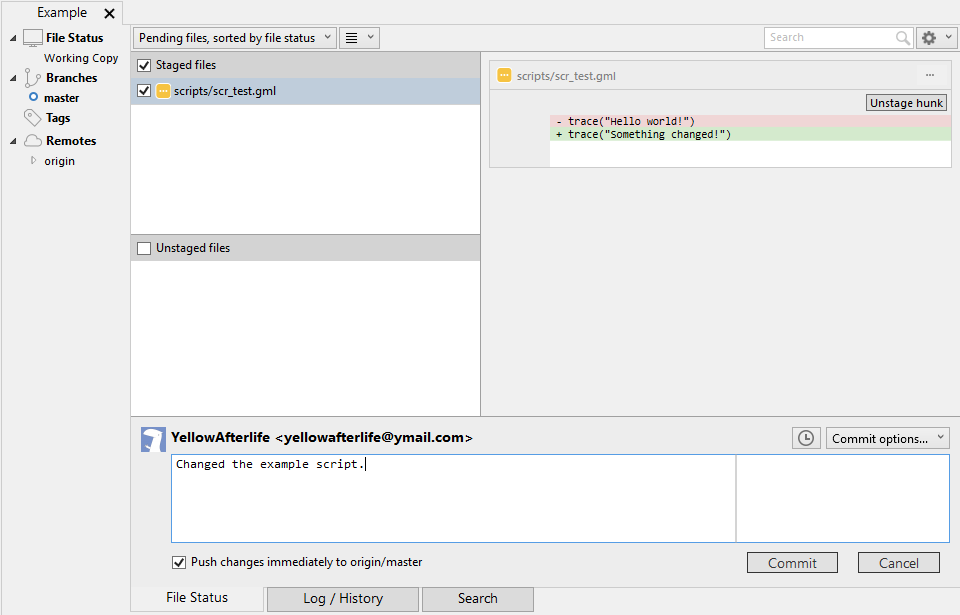 So you can review changes, group them into one or more commits (by using checkboxes near the individual files rather than the one on top), or discard the change(s) altogether (by picking "Discard" from the per-file context menu).

Similarly, once you are done picking the files to be committed, you enter a commit message, hit Commit, and the changes sync to the server.

Since only the changed portions of files are transmitted, such subsequent commits will be much smaller and upload quicker than it would have taken with a complete copy of a project.

If you need to review your past changes, you can do so in the "Log / History" tab.

Here you can pick individual commits and see the files and changes in them: 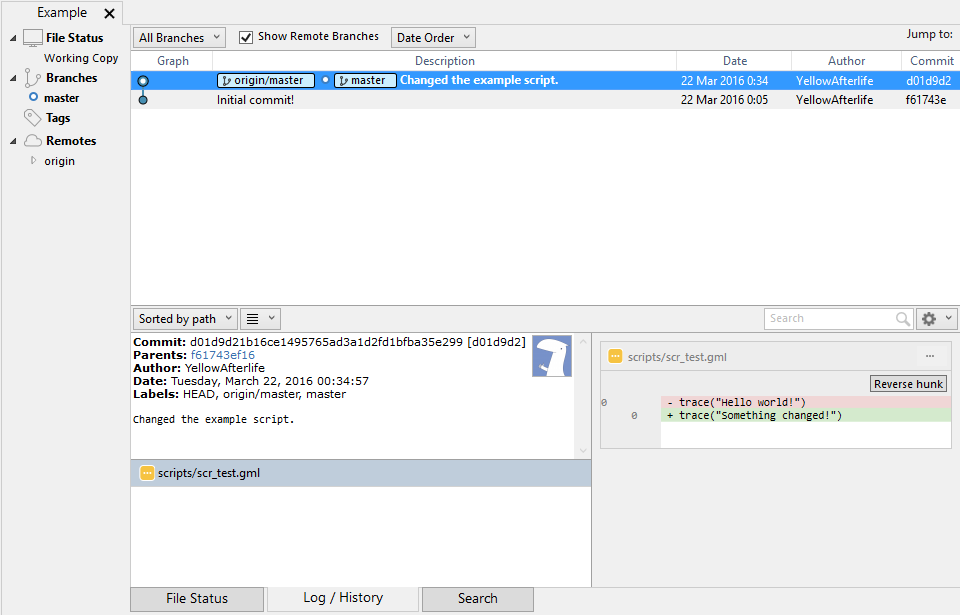 If you need to revert the project to a state as of a particular commit, you can do so by right-clicking a commit and picking "Reset current branch to this commit". It is generally adviced that you commit any uncommitted prior to avoid mixing changes to the current version with the older files.

If you have created a private repository, you will need to explicitly grant people access before they will be able to download the repository contents or make changes.

BitBucket makes this option prominent by having this average-sized banner on the right side when viewing the repository page:

So you click that, enter people' email(s), pick the access rights ("Read" to let people download the changes, "Write" to also allow them to make changes), click a button, and the invitations are sent.

Then they accept the invitations, clone the repository (which now has the project in it), and can similarly work with it.

When remote changes have been made, you can apply them to the local setup via the "Pull" option.

"Fetch", in contrast, will check and download the changes, but not apply them to the local setup.

By default, most version control programs will check for remote updates on repositories once per 10 to 15 minutes. If you know that a change have been made, picking "Pull" or "Fetch" will also re-check for changes.

So long as the exact same portions of files are not changed by multiple people at once (local changes versus the just-downloaded commit), no additional issues arise. If you did happen to do such a thing, you'll need to either discard the change and re-apply it in another commit, or look up "branch merging".

While familizaring yourself with version control takes a bit of time, subsequent operations take much smaller amount of time/effort, and long-term advantages far outweight the time spent learning.

If I have overlooked something in this post, feel free to ask.