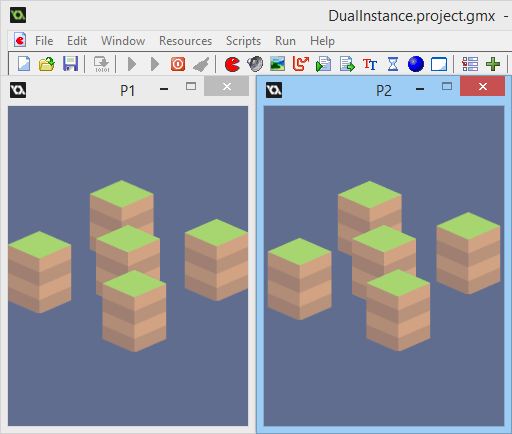 If you are using GameMaker: Studio to create multi-player games (via not-so-recently added network_ functions or by utilizing existing DLLs) without separate projects for server and client, you might have stumbled upon one annoying limitation - you can't run two instances of game from IDE.

From a glance, this looks like a small issue, but it gets tedious really fast - to run a second instance, you have to either compile the game (takes time and monotonous file dialog actions), or find a compiled .win file in depth of temporary directories (or otherwise retrieve it's location via means of WinAPI), and pass it to the runner via command-line, like

But that's no fun, right?
At least I've found so.
So I took a bit of time and made a small GML snippet to lift this unfortunate limitation.

The idea is simple.
Since GameMaker: Studio passes game file as a parameter to it's "runner" executable, game file location can be retrieved via parameter_* functions.
Then, there's the actual part with running a second game instance. Normally this would have been tricky, but I've made a DLL for that just recently, which adds a quite-so-convenient shell_execute function.
And, thinking of it, manually moving windows around also gets old fast, so may as well add that.
Combine the three, and this small nice snippet appears:

Where shell_execute is from earlier mentioned DLL file (for GM8x you can replace it with execute_shell), and -secondary, is, well, just a dummy parameter that we need to push parameter_count to a higher value. Don't remove it though! That would create a fork bomb. You certainly don't want to make one of those on accident.

And... that's it! Just in case any of this wasn't obvious, you can also download a sample project file with extension in it:

15 thoughts on “GameMaker: Testing two game instances at once”