SolidFiles: File hosting without the bullshit.
— company motto. TL;DR: more like, with some bullshit.

For a while now I spend my time correcting old links to my examples hosted on SolidFiles whenever I spot one. Mostly they are on forums or my blog and I can correct them relatively easily. Sometimes I cannot edit them and they just stay like that.

Since it's no fun, and I do get complaints about leftover links somewhere every now and then, I've thought that I may as well make a small post highlighting my concerns.

A bit of history on usage

I have been using SolidFiles for hosting my examples (mostly for GameMaker) and images since late 2009 (when both Boxstr and WillHostForFood have mysteriously imploded) and until mid-2012 when service' intentions slowly started to grow increasingly questionable and I have finally moved to putting my downloadable files on Dropbox (which, just in case you don't know, is shockingly nice).

Through these 2.5 years of active use I would periodically upload my examples, related imagery, and sometimes screenshots/jam game builds, in the end resulting in account occupying 400MB space and containing...

... 191 examples? Uh-oh. In the defence of my sanity I would like to say that certain examples had multiple revisions hosted, meaning that the actual number should be around 100..130. Which is still around 1 example per week on average, but does not sound as crazy.

Most examples have been downloaded between 40 and 50 times (supposedly due to 50-example compilation topic that I probably won't have endurance to update for a while), with some exceptions (primarily examples that I have made blog posts for) going into thousands of downloads before being replaced with Dropbox links. Which may or may not have been convenient considering the potential trouble that I have unknowingly bestowed upon people by hosting these at SolidFiles (more about this below).

So generally it was fun while all was well.

At the time of me signing up, the service has reflected the motto completely - it was quite "to the point". Download page did not contain ads at all (or they did generally happen to be nonintrusive enough for me to not memorize their presence), downloads were direct, and you could even copy the direct download link for person to not even have to go through the download page (which probably wasn't a necessary move for a service making money from ads).

Then an additional (graphical) ad popped in. Then another one. Then, at some point of time (from which is I have started to migrate my links over) it has decided to pull a download dot com on it's users and started wrapping files in installers including variously questionable software.

And nowadays... let's take a look what an average download page looks like without any ad blocker extensions enabled:

Not pictured: An extra "floating" ad on the bottom and an occasional popunder.

So there are 3 prominently featured "download" buttons, none of which will get you your file on instant, and a small download link that will.
Of course, it would be no fun to label advertisements as ads or to deny serving ads that are explicitly trying to mimic site's style to trick the user into clicking them.
I'm suspecting that there is no law requiring to mention that a download link is an installer so that's not a thing either.
If you were paying attention and your desired file was not an executable, upon click the "download" button you could say like "Wait a minute! Why is my 13.5KB file download a 555KB executable?". If not... well, damn.

So what happens if you've made the mistake? Upon opening the installer you are greeted with a small window claiming to load the installer (??) for a handful of seconds that then expands into a window like this: 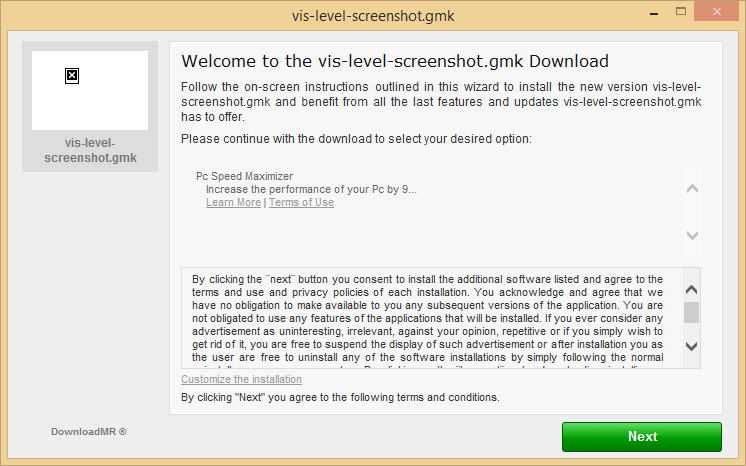 "Follow the on-screen instructions outlined in this wizard to install the new version FILE_NAME and benefit from all the last features and updates FILE_NAME has to offer."

So, the additional software is disabled by clicking the "customize installation" link and unticking the according item. It is almost pleasant to see that after all that has happened a bit of humanity is shown towards the user, but don't get too excited.

I have decided that I do not want to know what hides behind that mysterious emphasis, disabled the item, and clicked "Next".

And what is it? Is it actually downloading my file now? Aww, you didn't have to. Allow me to pick download locatio-- oh, you are just slamming the file into my desktop. That's alright. Yeah, and place a "resume download" shortcut there too pointing to another conveniently dispatched executable in newly created AppData directory, 'cause downloading 21KB files ain't no joke.

Upon inspecting changes to sandboxed environment that the installer was ran in, there are some temp files (who cleans temp files anyway - maybe you'll be lucky to get a program that will do that in the installer next time), the aforementioned sub-installer, and... a bulky IE error log. Why an IE error log? Because the installer is, in fact, running on IE frames (hopefully one, but possibly up to 3). A web developer might be able to easily notice that from the distinct tall scrollbar arrow buttons and the broken image icon. Why would you need to use IE frames to display few bits of text? Perhaps that'll remain a mystery.

SolidFiles is not as bad as it could have been, but the company seems to have it's own definition of it's motto, and incautiously downloading files from the website may result in having to clean out unwanted software. While the practices employed may be legal, I personally do not find them acceptable thus advice to consider alternatives to using the service where possible.

One thought on “Few notes on SolidFiles”