In light of recent news (original wording on archive) of the game's multiplayer update being canceled and overall uncertainty about the game's future, I look back at the game, the announcement, and how did this even happen.

For legal reasons, this post only relies on publicly available information.

If you've already read the linked post, you might have noticed that it starts with gracefully throwing the entire development team under the bus on premise that situation was out of control - despite of, you know, being in charge of it all.

Let's take a look at that for a bit:

When answering questions on Discord later, HopFrog said (screencap) that he takes all responsibility (edit: this had been reiterated in the updated announcement), but still this reads unusually. At least no one's getting hate tweets this time - as far as I can tell. 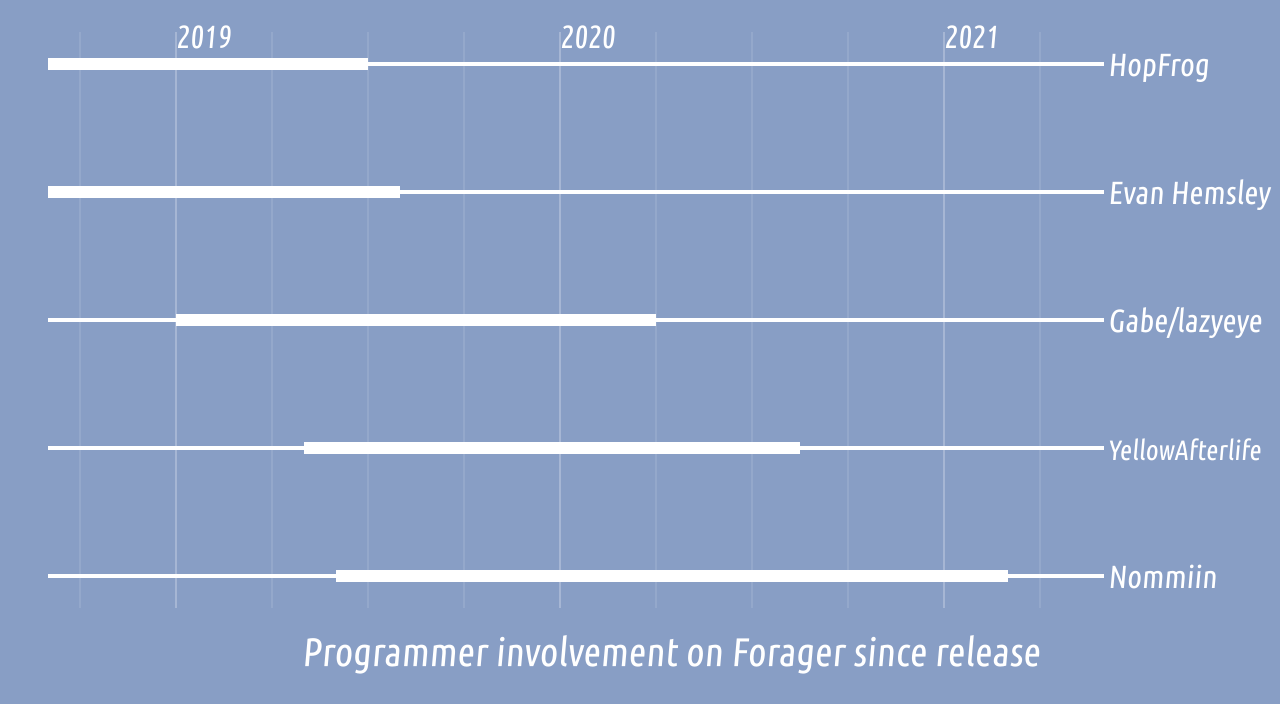 A thing that set Forager apart of basically any other game of its scale is how few people worked on the programming parts of it - despite the ever-growing scope and issues.

Since (similarly, in constrast to most other games) HopFrog would never announce arrivals/departures of team members, it is not known when exactly Evan started working on the game, but it was likely pre-2019.

Evan did additional programming and initial console ports - a rather thankless job, considering that the game was still in development and was undergoing optimization passes around the same time.

We can only assume that there had been some sort of disagreement between Evan and HopFrog since Even stopped working on the game mid-2019 and was later removed from credits.

Gabe/lazyeye was the second programmer to be hired.

Similarly, exact date of Gabe starting to work on the game is not known, but it had been sometime in early January 2019.

Gabe was initially helping with optimization and bugfixes, and was promoted to lead programmer role after HopFrog stepped away from programming.

Gabe moved on to work on other projects in Spring 2020.

I was the third programmer to be hired.

It was a great time! Watching people use the available tools in new and unexpected ways is perhaps my favorite thing about working on modding systems.

My involvement ended abruptly in August-September 2020.

Nommiin was the last programmer to be hired. This is the only hire that has an actual date since it was posted about on Nommiin's personal Twitter.

Nommiin was originally working as an assistant programmer aiding with modding support and bugfixes, and was implicitly promoted to lead programmer after Gabe's departure.

According to player observations on the game's official Discord server, Nommiin suddenly lost "developer" roles on Discord on March 1 (amid what seemed to be a regular batch of bugfixes), removed mentions of Forager from the Twitter bio the next day, and by March 29 has found a new job at Innersloth.

All in all: Although the game was, by all means, on its last leg for a good half of a year, HopFrog did not hire any new programmers to assist with delivering the multiplayer update faster or increasing the game's stability to a viable point.

In comparison, both Rivals of Aether and Voidigo have a total of 7 team members involved with programming in some way - either actively or being available to step in if something goes wrong.

Although the announcement explains the reasoning to a degree, some gaps remain in the story:

Given the NDA-driven nature of the industry, it's hard to tell what really happened and why.

As someone with an entire career revolving around fixing and retrofitting years-old codebases to do things they were never expected to do, I strongly believe that it's rare for a game to be truly unsalvageable - yes, it may set back the development a few months, but such things happen when you ignore an issue until it gets that bad.

The concept of a partial or complete rewrite of the game in same or different engine while the original codebase receives minor updates also isn't new, allowing to maintain momentum and not lose active players in process.

But, of course, it is also a matter of short-term vs long-term planning.

What and how can be done with the game is an interesting question given the circumstances.

Some things aren't - for example, any issues related to savefile corruption or modding support are going to be harder to fix after cutting ties with everyone that knew how the code works.

Some things are particularly tricky - for example, to keep the console versions up to date, the game will soon need to move to a newer GameMaker version, which is a massive task to undertake.

As for multiplayer, well, that's it - if the work started from local multiplayer, the game could still be played over internet using Parsec, Remote Play Together, or a tool I made. But it was not, so it cannot be, and at most someone might make a slightly more advanced version of topherlicious' PenPal mod.

Quite fortunately, none of this is my personal subject of worry.

First, I'm happy to inform that if you are making a game and reading this worries you, you are somewhat unlikely to run into the same issues - Forager was a statistical outlier in both of its successes and failures.

Still, there are some things that you can do to avoid issues discussed in this post:

Big tragedies often come from series of small issues that were neglected for long enough, and it is really unfortunate to see the game end up like this.

As to whether anyone had learned anything from this, time will show.

For now, the game's audience seems accepting enough and even enthusiastic about potential future games from the developer. I think we all can aspire to have fans this loyal. Hold up,

I have originally tried to maintain a neutral point view in this post on assumption of good faith, but discussion on Twitter has revealed even more issues:

It seems increasingly more apparent that whatever this is had been going on for years, and the game had only miraculously survived this long thanks to kindness and patience of collaborators - the same people that are now being blamed for it all.

Although the volume of replies to my Twitter thread remains quite high (to the point that it's hard to respond to everyone), people have been also pointing out new things that are publicly known but not covered here:

10 thoughts on “Forager in retrospect”